On a patch of grass outside the fence that surrounds the community garden at Fred Alexander Park, a cherry tree is dying and Reggie Singleton knows why. The tree’s brown, bare branches stand in stark contrast to the two peach trees planted next to it, already sprouting the tiniest orbs of fruit beneath a flourish of green leaves in early spring.

Inside the fence, the 18 young men that are a part of the current class of The Males Place are carefully digging holes in freshly tilled soil, adding seeds and transplants of a variety of vegetables in neat rows. They’re planting this year’s spring garden.

All of it is done by following the guidance of Singleton, executive director of The Males Place and a certified master gardener who has studied the agricultural traditions of communities and cultures worldwide. Over the past decade, he has taken boys who garden near this hectic stretch of Beatties Ford Road to Ghana and Cuba; to Alabama and Washington, D.C. There, they’ve learned about regenerative agriculture and from experts at land grant universities.

That’s why Singleton is frustrated that he didn’t realize sooner what was happening with the cherry tree. The lonely tree was planted about 10 years ago, and began its steady decline until it reached its bare-branched nadir this year. “We learned a painful lesson about that tree there,” Singleton says, pointing to its brittle limbs. “We didn’t plant a companion for it. It needs two to cross-pollinate.” Singleton is not one to give up on anyone or anything, though. He won’t cut down the dying cherry tree; he’s going to encourage it to blossom. “We’ll plant another one,” he says.

The same, of course, can be said for the boys and young men Singleton works with at The Males Place: He meets with them every week to encourage them to grow and bloom. The organization got its start as a Mecklenburg County Health Department reproductive clinic for young men, and its original focus was to hand out information and condoms in the hopes of reducing the rate of teen pregnancy. Singleton joined in 1993 and realized that the young Black men The Males Place was targeting needed more than just reproductive health information.

The organization’s official mission statement is “a guided journey into manhood,” but it goes about it in a unique way: Agriculture is one of the three main pillars (mentorship and social justice are the others) of its foundation. Many, but not all, of the boys have grown up without fathers involved in their lives, and the older men who volunteer time to mentor and educate are vital to its success. In 2009, The Males Place began planting the community garden at Fred Alexander Park. Fifty percent of the boys’ time with the group now is spent at the garden. Each Wednesday, they meet to learn life skills and cultural enrichment. And every Saturday morning, they’re at Fred Alexander Park to work on the garden. Singleton, 60, grew up in the Sea Islands of Charleston, South Carolina, and did seasonal migrant work as a boy to help earn money for his family. He’s understood all his life how working on the land not only teaches self-sufficiency, but also generates a strong sense of community when the bounty and labor are shared. This is what he hopes to impart to the young men in The Males Place.

“It’s more than just a garden,” Singleton says. “There’s a Hispanic proverb that says the farmer or the gardener realizes that more emerges from the garden than he plants. And we’re talking not only in terms of plants but in relationships and everything else.” 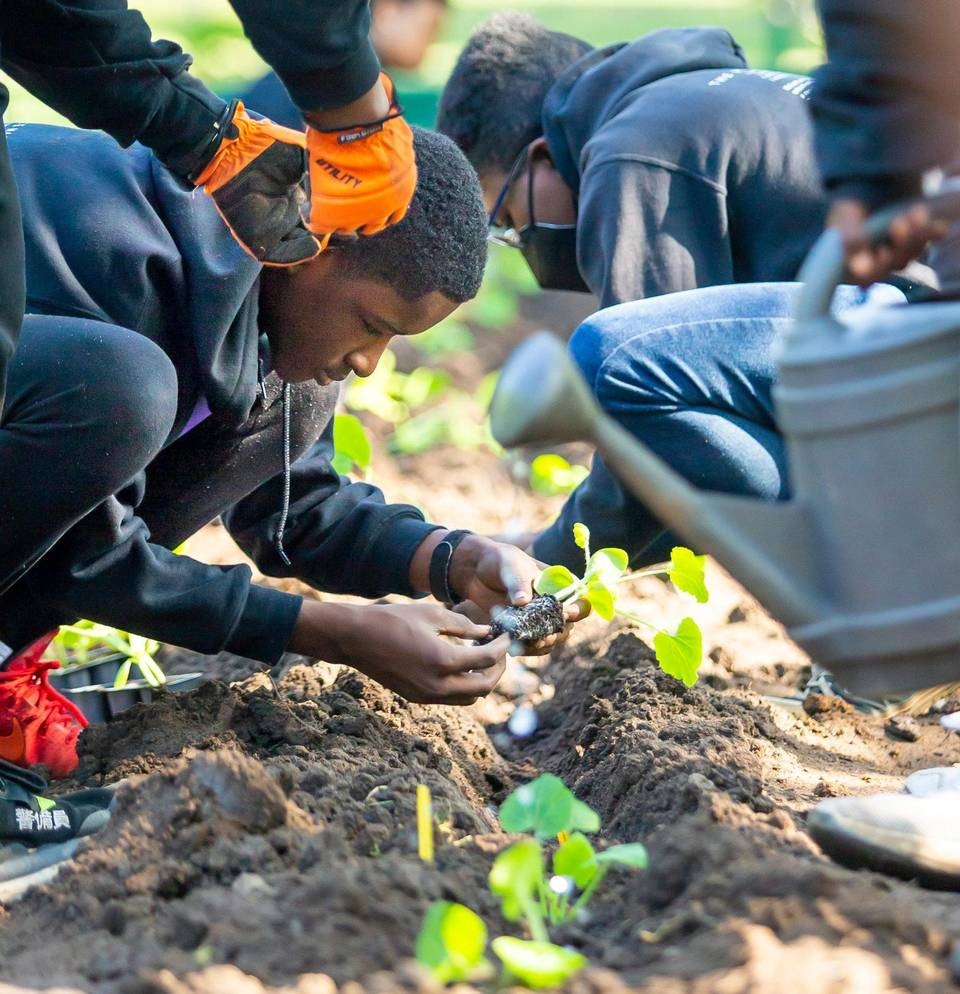 A.J. Simmons started working with The Males Place as an “elder” — what the program calls its mentors — soon after he moved to Charlotte in 2015. The work he did with the boys ages 12-18 was so complementary to his work on his master’s degree in community psychology at UNC Charlotte that he wrote his thesis on how working on the farm can facilitate development in young men. Simmons goes by the title “mshauri,” a Swahili term for adviser, when he interacts with the “warriors,” what the young men in The Males Place program are called. “To grow something from seed to fruit and bring it home to your family?” Simmons says. “There’s a certain level of competence that comes with that that many of our young men, they don’t receive that in too many other places.” Simmons also is eager to teach the boys “critical and cultural knowledge that they are definitely not getting in schools,” including African history and recent American history specific to African Americans.

The farm is divided into quadrants, each dedicated to one of four great tribes of Africa. In the past 13 years, the group has visited Selma, Alabama, to learn about marches for Black voting rights and Bloody Sunday; Washington, D.C., to visit the National Museum of African American History and Culture; and historically Black colleges throughout the area to learn more about those institutions and what they offer. Next year, they hope to travel to Egypt to learn farming traditions gathered over centuries there. And Singleton always makes sure that each year The Males Place warriors plant cotton in their garden. It’s not to use the crop, but to teach the young men about what many of their ancestors endured as enslaved people. “Many of them didn’t know about the history of cotton, not only from how cotton played a role in creating this wealth gap that exists right now between Blacks and whites, but also just historically from a cultural standpoint, the tribulations and the difficulties and having to endure the sun and snakes and being pricked by the cotton boll and having to pick 100 pounds of cotton per day,” Singleton says. “And just the cruelty of that.”

In 2009, Denzel Ross was a West Mecklenburg High School junior when his mom pushed him to be involved in The Males Place after meeting Singleton at the health clinic. At first, he was just “so-so” about the program, but soon became so attached to the work he did not only with the garden but the people he met, that he still volunteers time with the group whenever possible. “I learned to share advice, to share positivity because sometimes we’re in a certain situation and it feels like there’s nobody else we can relate to,” Ross says. “You want to talk to somebody who is kind of closer to your peer. So I try to share some insight, give some positivity and words of encouragement.” Ross is 30 years old now, has a mechanical engineering degree and is in the Army National Guard, stationed in Texas. Singleton still labels Ross as “son” in his phone.

“I’m trying to, I guess you could say, reach that level of expectations that he saw in me early on,” Ross says. Adonis Adams is 17, and has been involved in The Males Place for the past four years. The senior at Indian Trail’s Porter Ridge High School didn’t know anything about working with plants or gardening until he learned from the program. “Mom always wanted me to grow a garden, so I’d done a little research into it, but I didn’t really get involved until I got into The Males Place,” Adams says. “So, it was just a huge learning experience.”

He’s learned, for instance, about precisely how much to water each plant, and that the most delicious okra are the ones that are picked early; if you leave them on the plant too long, they become too fibrous and chewy. “There’s a lot of things that go into this that a lot of people don’t really know about,” Adams says.

This year, the young men in The Males Place are preparing soil in a handful of raised beds nestled behind rows of seeds and transplants that elders helped mark in carefully measured rows. They’re planting tomatoes, peppers, squash, beans and corn. Several blueberry bushes are clustered in the center of the earthy garden. There’s a hibiscus tree, too, that gave Matthew Charity his first sample of hibiscus tea a few years ago. Charity is an elder whose 14-year-old grandson, Cole Allen, has been involved with The Males Place for the past few years. “It opened my eyes,” the 71-year-old says. “I drink hibiscus tea, now.” Most of what the garden produces goes to the young men in the program and their families, or is provided to nearby seniors or low-income community members. Some is sold during the summer months at the Rosa Parks Farmers Market at 1600 West Trade St., where the young men also sell fresh produce from partner farmers and learn about entrepreneurship. And late each fall, their wildly popular collard greens sale helps provide fresh greens for holiday dinners.

Charity, though, prefers the kale from the garden, if he had to choose among the fresh greens. “The kale that you get here,” Charity says, sighing, “oh, it’s just heavenly.” Varnell Bien-Aime doesn’t want to take full credit for just how tasty all the vegetables produced at Fred Alexander Park are, but he’s not discounting the possibility that he might personally have some sort of effect. When it’s the elder’s turn to water the garden, he walks up and down the rows, talking to each budding green plant. “Hey, you’re doing a great job!” he’ll tell them. “Come on, grow!” “Just encouraging words,” he says, chuckling. “It’s only weird if it doesn’t work. As long as they keep growing, I’m going to keep talking.” Superstitious words aside, Bien-Aime says the effect he’s seen The Males Place have on his 18-year-old son Nyjhol and on his own life has been transformational. The group emphasizes seeking opportunities to “do good” each week. With that in mind, Bien-Aime has, himself, helped people change tires on the side of the road, and watched Nyjhol become more aware of ways to seek such positive moments daily. And then, when they come to the garden each week, they’re able to appreciate all the work that they’ve done both inside and outside that fenced-off patch of vegetables and fruits.

“It’s so peaceful,” he says. “This is where I feel like The Males Place has really paid me back. Just having another outlet to get away. Because you can drive down this block and turn right and it’s just chaos — getting in the car, moving this way and that on the highway. But you’re out here and it’s just … peace.” It’s not always easy, though. It takes a lot of care and attention to make sure everything flourishes. Sometimes, cherry trees die. But more often than not, they’re able to watch the fruits of their labor grow sturdy roots and blossom. “A lot of people would say, ‘I love farming, I love what you guys are doing,” Singleton says. “Man, this stuff is hard. It is hard. It is not as pretty as it looks. We’re growing more than plants. We’re growing men.” 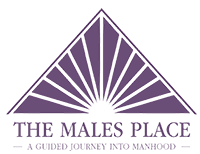 The Males Place aims to provide life skills and other help to 12-18-year-olds so they will develop into responsible adults.